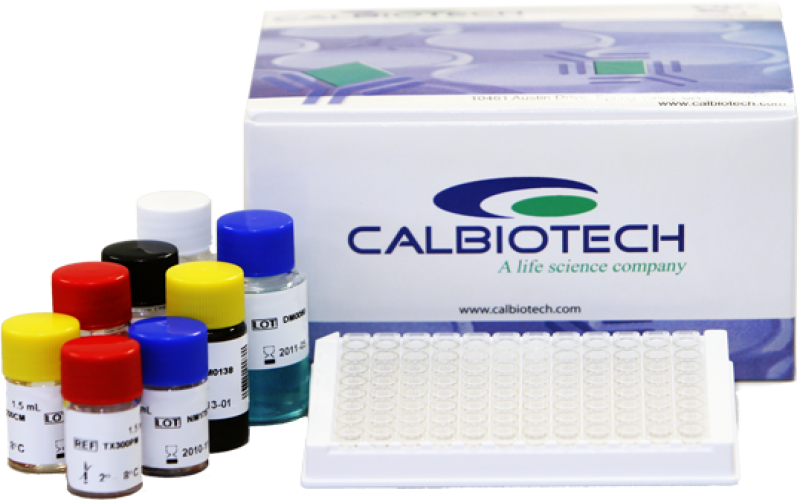 Indication: The ELISA test kit provides a semiquantitative in vitro assay for human anti -bodies of the immunoglobulin class IgM against Brucella abortus in serum or plasma for the diagnosis of brucellosis.

Application: The Anti-Brucella abortus ELISA is a supplement to the direct pathogen detection for the diagnosis of Brucellosis. Taking into consideration the clinical symptoms, detection of IgM and/or IgA antibodies and a clear titer increase of IgG antibodies in a serum pair taken after at least 2 weeks time can be seen as indication for an acute Brucella infection. Moreover, serological investigations are suitable for clarification of epidemiological questions.

Principle of the test: The test kit contains microtiter strips each with 8 break-off reagent wells coated with Brucella abortus antigens. In the first reaction step, diluted patient samples are incubated in the wells. In the case of positive samples, specific IgM (also IgA and IgG) antibodies will bind to the antigens. To detect the bound antibodies, a second incubation is carried out using an enzyme-labelled anti-human IgM (enzyme conjugate) catalysing a colour reaction.

Contents of the test kit:

Preparation and stability of the reagents

Note: All reagents must be brought to room temperature (+18°C to +25°C) approx. 30 minutes before use. After first use, the reagents are stable until the indicated expiry date if stored at +2°C to +8°C and protected from contamination, unless stated otherwise below.

Storage and stability: The test kit has to be stored at a temperature between +2°C to +8°C. Do not freeze. Unopened, all test kit components are stable until the indicated expiry date.

Waste disposal: Patient samples, calibrators, controls and incubated microplate strips should be handled as infectious waste. All reagents must be disposed of in accordance with local disposal regu-lations.

Warning: The calibrator and controls of human origin have tested negative for HBsAg anti-HCV, anti-HIV-1 and anti-HIV-2. Nonetheless, all materials should be treated as being a potential infection hazard and should be handled with care. Some of the reagents contain sodium azide in a non-declarable concentration. Avoid skin contact.

Stability: Patient samples to be investigated can generally be stored at +2°C to +8°C for up to 14 days. Diluted samples should be incubated within one working day.

Introduction: Before the determination of specific antibodies of class IgM, antibodies of class IgG should be removed from the patient sample. This procedure must be carried out in order to prevent any rheumatoid factors of class IgM from reacting with specifically bound IgG, which would lead to false positive IgM test results, and to prevent specific IgG displacing IgM from the antigen, which would lead to false IgM-negative test results

Functional principle: The sample buffer (green coloured!) contains an anti-human antibody preparation from goat. IgG from a serum sample is bound with high specificity by these antibodies and precipitated. If the sample also contains rheumatoid factors, these will be absorbed by the IgG/anti-human IgG complex.

Performance: The patient samples for analysis are diluted 1:101 with green coloured sample buffer. For example, add 10 µl sample to 1.0 ml sample buffer and mix well by vortexing. Sample pipettes are not suitable for mixing. Incubate the mixture for at least 10 minutes at room temperature (+18°C to +25°C). Subsequently, it can be pipetted into the microplate wells according to the pipetting protocol.

The above pipetting protocol is an example of the semiquantitative analysis of antibodies in 24 patient samples (P 1 to P 24).

Calibrator (C), positive (pos.) and negative (neg.) control as well as the patient samples have been incubated in one well each. The reliability of the ELISA test can be improved by duplicate determinations of each sample. The wells can be broken off individually from the strips. This makes it possible to adjust the number of test substrates used to the number of samples to be examined and minimises reagent wastage. Both positive and negative controls serve as internal controls for the reliability of the test procedure. They should be assayed with each test run.

The extinction of the calibrator defines the upper limit of the reference range of non-infected persons (cut-off) recommended by EUROIMMUN. Values above the indicated cut-off are to be con-sidered as positive, those below as negative.

For duplicate determinations the mean of the two values should be taken. If the two values deviate substantially from one another, EUROIMMUN recommends to retesting the samples.

A negative serological result does not exclude an infection. Particularly in the early phase of an infection, antibodies may not yet be present or are only present in such small quantities that they are not detectable. In case of a borderline result, a secure evaluation is not possible. If there is a clinical suspicion and a negative test result, we recommend clarification by means of other diagnostic methods and/or the serological investigation of a follow-up sample. A positive result indicates that there has been contact with the pathogen. In the determination of pathogen-specific IgM antibodies, polyclonal stimulation of the immune system or antibody persistence may affect the diagnostic relevance of positive findings. Significant IgG titer increases (exceeding factor 2) and/or seroconversion in a follow-up sample taken after at least 7 to 10 days can indicate an acute infection. To investigate titer changes, sample and follow-up sample should be incubated in adjacent wells of the ELISA microplate within the same test run. For diagnosis, the clinical picture of the patient always needs to be taken into account along with the serological findings.

Calibration: As no quantificated international reference serum exists for antibodies of the IgM class against Brucella abortus, results are provided in the form of ratios which are a relative measure for the concentration of antibodies.

For every group of tests performed, the extinction readings of the calibrator and the ratio values determined for the positive and negative controls must lie within the limits stated for the relevant test kit lot. A quality control certificate containing these reference values is included. If the values specified for the control sera are not achieved, the test results may be inaccurate and the test should be repeated.

The binding activity of the antibodies and the activity of the enzyme used are temperature-dependent. It is therefore recommended using a thermostat in all three incubation steps. The higher the room temperature (+18°C to +25°C) during the incubation steps, the greater will be the extinction. Corresponding variations apply also to the incubation times. However, the calibrator is subject to the same influences, with the result that such variations will be largely compensated in the calculation of the result.

Antigen: The antigen used is Brucella abortus of strain W99.

Cross reactivity: The quality of the antigen (whole antigen) used and the antigen source (Brucella abortus strain W99) ensure a high specificity of the ELISA. An increased titer of antibodies against O-antigens of Yersinia enterocolitica 09, Francisella tularensis, Vibrio choleare, E. coli 0157, Stenotrophomonas maltophila and salmonellae can lead to false-positive results due to cross-reactions. With Vibrio cholerae cross-reactions may occur in infections as well as after immunisation.

Interference: Haemolytic, lipaemic and icteric samples showed no influence on the result up to a con-centration of 10 mg/ml for haemoglobin, 20 mg/ml for triglycerides and 0.4 mg/ml for bilirubin in this ELISA.

Study II: 80 pre-characterised patient samples (origin: Germany, reference method: commercially available ELISA of another manufacturer) were analysed with the EUROIMMUN Anti-Brucella abortus ELISA (IgM). The sensitivity amounted to 96.7%, with a specificity of 97.9%. Borderline results were not included in the calculation.

Reference range: The levels of the antibodies against Brucella abortus (IgM) were analysed with this EUROIMMUN ELISA in a panel of 500 healthy blood donors. With a cut-off of ratio 1.0, 1.6% of the blood donors were anti-Brucella abortus positive (IgM).

Brucella abortus belongs to the genus Brucella and is the most frequent causative agent of brucellosis in the Western hemisphere. The pathogen is a gram-negative, aerobically growing, coccoidal, immobile (rod-shaped) bacterium which does not form spores. It is one of the four worldwide distributed Brucella species/biovars that are transmitted from infected animals to humans at close contact. Brucella abortus is found predominantly in cattle, while Brucella melitensis found in goats, camels and sheep, Brucella suis in pigs and Brucella canis in dogs. These obligatory pathogens of zooanthroponosis cause acute or chronic general infections with fever and granulosmatous tissue reactions in humans. Worldwide, around 500,000 cases of brucellosis in humans are registered every year.

Brucella abortus, which was discovered in 1896 by the Danish bacteriologist Bernhard Lauritz Frederik Bang (1848-1932), can be found worldwide and is transmitted by direct contact with cattle or by consuming unpasteurised milk or dairy products or insufficiently cooked beef. Human to human transmission is rare but may occur in isolated cases through breast milk or sexual intercourse.

Brucella abortus, the causative agent of brucellosis (Bang’s disease), can enter the human body via the gastrointestinal tract, the respiratory tract or skin wounds. There, the pathogen is first absorbed by poly-morphonuclear granulocytes and later by macrophages and subsequently transported to the nearest lymph nodes. Brucella may also enter the bloodstream through the lymph system and spread haemato-genously in organs that are rich in macrophages such as the spleen, liver, bone marrow and lungs. The testes, gall bladder, prostate and central nervous system can also be affected.

The disease manifests in various ways. The main forms of manifestation are the following:

In Germany, brucellosis is a notifiable disease according to the German law for the protection against infections (Infektionsschutzgesetz). The diagnosis of brucellosis is supplemented by serological methods. Agglutination tests are increasingly being replaced by antibody class specific ELISA (e.g. IgA, IgG and IgM Anti-Brucella abortus ELISA), which provide higher sensitivity and specificity (over 95%). Besides the determination of the antibody class, the measurement of titer level and titer increases is especially important for final diagnosis.

Additionally to the serological determination, Brucella abortus infections in cows can also be diagnosed by the detection of specific antibodies in their milk using ELISA, which shows a sensitivity of 98.5% and a specificity of 99.9%.

Brucellosis can be treated with antibiotics. A vaccine for humans has not yet been developed. Besides personal hygiene, successful preventive measures against brucellosis in humans include monitoring and elimination of infected live stock, burning of carcasses, regulation of imports and pasteurisation of milk.